We are now in the middle of our main calving period and the pressure on cubicle space is apparent! Also we have the problem of a reduced number, due to having taken 20 cubicles out around the sheds to make way for the out of parlour feeders. The last actual barrens we sold, were exported to Dunbia in July, being only 7 in number. The time before that was in April when we sold 6 culls and a bull, 11 culls in February. This brings our culling rate including deaths, down to 9% for the last 12 months! Remember, we have 450 cows…..

We have been trying to finish a run of cubicles with the rain and gales hampering progress and still have about 80 animals out. We are starting to worry about having enough grass for turnout next March.

Here we have the added complication of being in the middle of the Irish Sea when selling cattle. There are all sorts of hoops here we have to jump through and the added vagaries of the weather. This is how it goes:-

If we want to sell in a market, say Beeston, we have to find a friendly farmer to take on our heifers when they arrive. This is because the animals have to rest and have their passports changed from IOM to UK, 10 days is needed for this to happen. We eye up a likely sale date, about 17 days earlier we have to notify DEFA here that we want to export. The animals are inspected by the vet, all have to be 100% with two sets of eartags (not even a flag missing from behind) Then we have to wait for the weather, the lorry  inspected!

We cannot send out a wagon on the ferry over a force 4, we have sent animals down to the dock and the captain has refused to take them on board, arriving back half an hour later! With us being a closed herd, we have the added complication of filling that particular lorry as we will not put our animals with any others. It costs £130 – £140 for each animal on that lorry. Also we cannot double deck large cattle due to once I think, one tipping over, killing cattle and damaging cars during a rough crossing, though things are getting slightly more lenient and things are changing. If they cannot sail due to a blow-up, we lose the validity of the inspection after 72hrs and have to start again! Artics can get stuck here for days sometimes, waiting for the weather to calm down.

So eventually the cattle are delivered by proxy to your friendly farmer. You have to have complete trust in him and his judgement as he looks after your silly heifers that get in all sorts of trouble. We did have one break it’s leg after an exuberant bulling session and had to try and still smile after a total loss! Then it’s on the computer and book the plane on the sale day, another couple of hundred pounds!

We do try and sell direct as at least we have taken one variable out of the equation. We have quite a few clients that come over the once, see the standard of the herd and after the first picked load, pick up the phone and ask for another lorry load!

Barrens and calves are another story… there is no market here on the island at present for either of them.

I know I always seem to end up talking about the weather, but we get such a lot of it and it plays a big part in our lives! Today, weather wise it has been rather tempestuous and it’s still blowing well. It was forecasted Force 9 to Severe Gale Force 10 here on the shipping forecast this morning on Radio 4 (I heard it because my better half got up for milking before the alarm and left me to stagger in the dark to switch it off, I put the radio on instead!) Driving through Douglas today on an errand before the heavy rain set in was like driving through a blizzard made of leaves,  freed from their moorings!

On the farm we are still calving well. Heifer, number P169 was born this evening, by Garrett. We are at present waiting for the colustrum to warm!

The whole silage bale feeding in the sheds to the milking cows seems to be working well. There is no longer any sorting of the silage and they seem much more settled, having food on tap all of the time. The ‘out of parlour’ feeders have now been fine tuned by ATL., all we need is the cows to use them properly!  We are training the dry cows giving just a taste and they seem to spend all day trying to extract a few pellets, so were wondering whether (after milk recording due later this week) to take the main percentage of cake off the high yielders on the parlour and see if this would tempt them more into the stations. I have tried the ‘shake the bucket’ routine behind the feeders, but got mobbed by the same 20 that were visiting the feeders, one of them recorded at 32 visits in a day!!!

How cows are motivated by food!!  We have the story related to us by our senior herdsman, now verified by my husband, of a cow that on finding the rotary platform stopped occasionally, before she can get on and reach the point where the feeder drops her food, will pull the the wire to get the parlour going again!!!! It makes you think? Perhaps they aren’t so thick?!!!

By the way, P170 has just been born and we are having to warm more colustrum before we can go to bed……….

Autumn is truly here but we rarely get a show here on the island, just the odd horse chestnut or line of beeches that the autumnal colours have touched. Leaves line our drive, skeletons of bare trees are already showing in the windblown mainly gorse manx banks that pass for hedgerows. Grass is blowing in the wind in the fields, bright green, but hopelessly wet now to take milking cows, really only fit for odd bunches of quietly grazing dry cows.

We aim to tighten the calving pattern in order to take advantage of our late grass and late, if any frosts. Having large numbers of drys and calving into the sheds would be ideal for us at this time of year. We have about 40 to 50% of the herd calving down now with still about 40 dry cows out. The ‘lows’ and heifers are still out grazing in the day though we are seeing more sore feet and stones in thin worn soles with their 1 mile to 2 mile daily walk . We have had about 8 inches of rain in the last two weeks so mud adds to the mix!!!!

Mud is our headache at the moment, it is everywhere! We need acres of concrete and the problem is at present is where to scrape the mud and stone to? Not through the sheds and cows, to visit our separator, fouling it up, whilst it tries to sort the muck out!!!

The PD session went well the other day. I was told to say here that our little experimentation group of Red and Whites (mainly Swedish Reds at the moment) were all in calf, but I must add that they aren’t very personable and not so pretty as our Black and Whites. They have though, which seems out of character, visited the new ‘out of parlour’ feeders really well, we still have loads of cows to learn and ATL are revisiting later this week in order to fine tune the system! 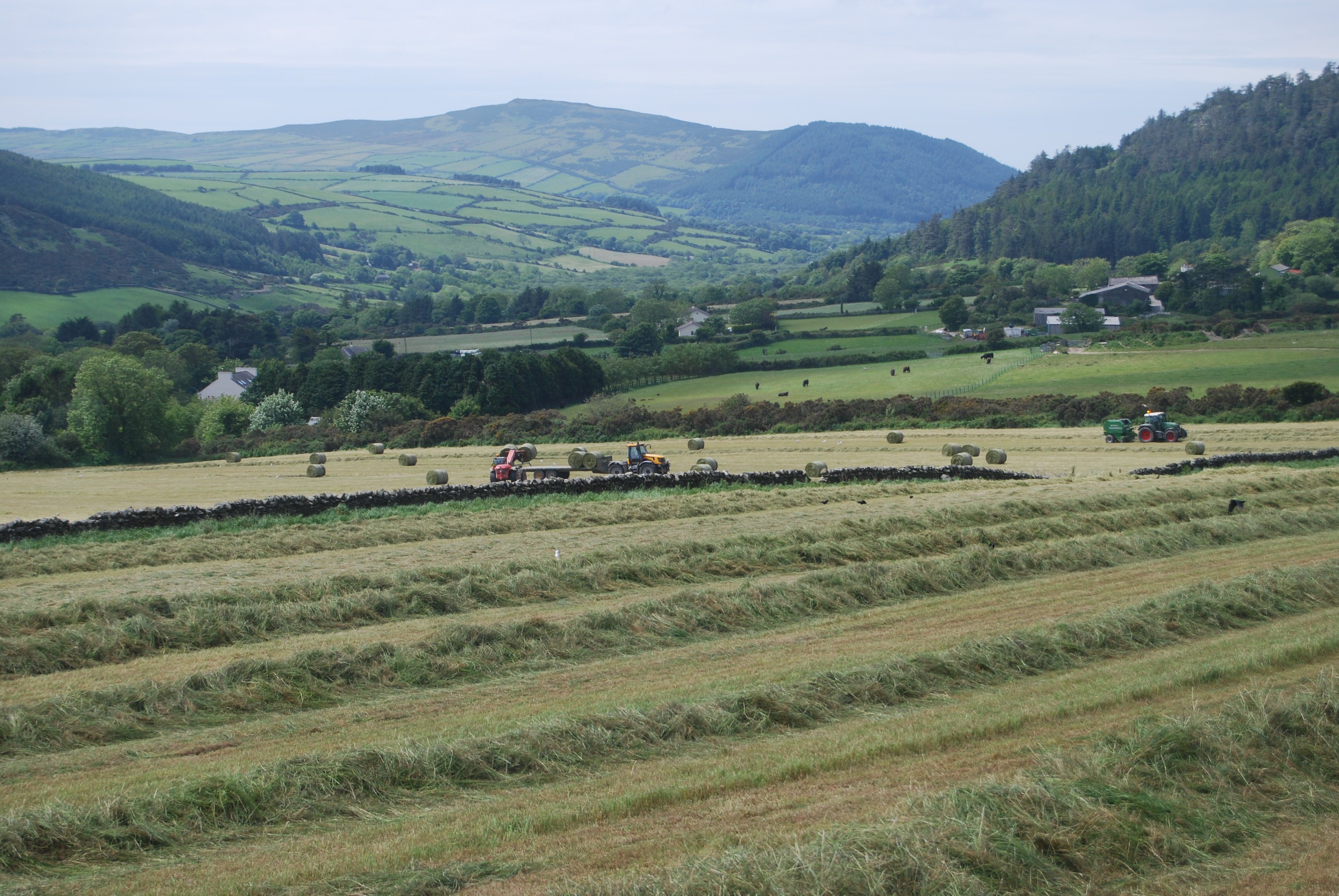 2nd Crop silage - all hands to the deck earlier in the summer - we have now managed to make 5,500 bales in total, ready for the winter!

Firstly, must mention that I’m glad everybody else in the UK is now experiencing our rubbish weather now….

Still running about in all directions – one of our valued member of staff has failed to turn in for work for the last few days, for no apparent reason! Phone calls and texts have failed to contact him, so we have had to put an advert in the classifieds on Manx Net to try and replace him. Staffing on the island is difficult as there seems to be plenty of jobs about. We even attended a livestock show on the island some years ago, leaving a herdsman at home, to milk that afternoon. We came back to find he had taken off and had lined up a job in a bank, starting next day! Things are a little more difficult now, but there is still an attitude of not taking employment and employers’ predicaments seriously..

The feed wagon has finally died a death, so we are quickly trying to get the ATL ‘out of parlour feeders’ up and running! I have a box of tags ready to go in when we find the time inbetween covering for our missing employee, milking, plus covering for another worker who is off sick legitimately! We have been having trouble getting the cows to put their heads in the feeders, but have solved that (I hope) by smashing up mineral blocks and putting in sections to attract them.

Delivered 11 bull calves that were born this week today, to a local farmer who has taken on the brave task to rearing and fattening them. We are relieved that we don’t have to put calves down at the moment as there is no market here to handle them, or many people interested in doing anything with them!!! Sexed semen is very interesting, but the bulls we are using at the moment, do not have that option. As usual, we are finding that the AI bulls produce loads of bull calves, our own bulls running as sweepers in the main herd and as sires in the young stock produce the opposite!!!! Perhaps the AI bull semen has already been sorted??? 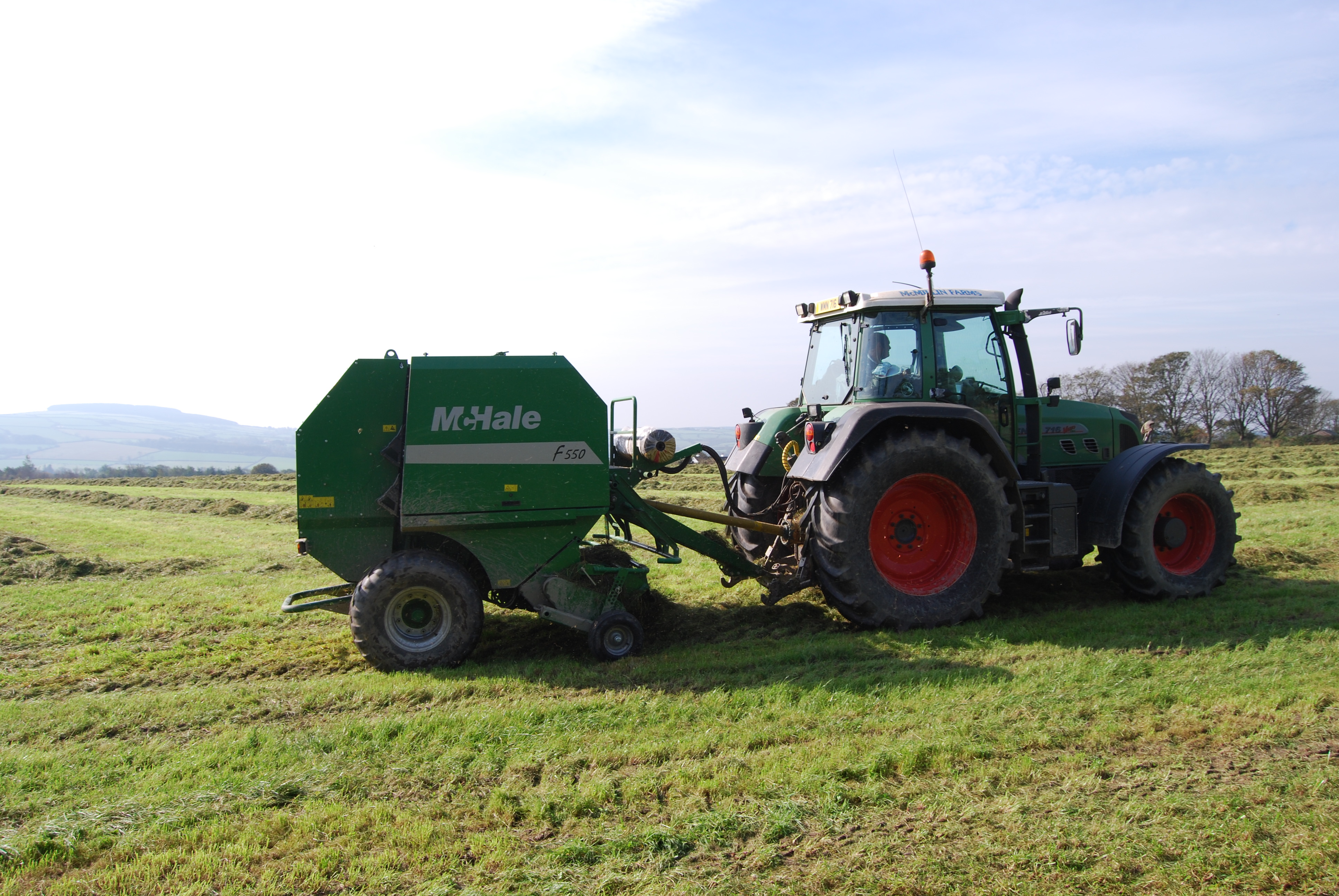